Who is to blame for the tragedy of the Amur Evenks?

The 5th Congress of Russia’s Indigenous Peoples (spring 2005) was the first time that Elena Kolesova, President of the Amur Association of Indigenous Peoples of the North, addressed RAIPON with an oral report on the violation of human and indigenous peoples’ rights by timber cutters, gold-diggers, railroad builders and state authorities. RAIPON leaders recommended that she write a complaint to Mr. Korotkov, Head of the Amur Oblast’s Administration. So she did, but all she got in response was advice to gather information on the violations and bring it to the Office of the Public Prosecutor of the Amur Oblast. She had done this before without getting any practical aid. Later, in autumn 2005, Ms. Kolesova wrote a request to Sergey Kharyuchi, RAIPON President (her note was published in “Mir korennykh narodov” No. 18). At the same time RAIPON received another letter from the Amur Oblast, by Arkadiy Okhlopkov, President of the clan community “Aborigen”, concerning violations of environmental legislation and indigenous peoples’ rights in the Selemdzhin Rayon of the region. Mr. Okhlopkov wrote that he had addressed the authorities of the Amur Oblast more than once, requesting the suspension of the illegal gold-diggers who were turning the Evenks’ pastures and hunting grounds into a desert, but in vain. The despair of the Evenks who are now deprived of means of subsistence after having lost their reindeer and the possibility to hunt is so great that they are ready to resort to self-immolation to draw the attention of the authorities. Arkadiy Okhlopkov even proposed himself as one of the sacrifices.

Following up on these letters, RAIPON wrote to Mr. Ustinov, General Prosecutor of the Russian Federation, on 11 November 2005. RAIPON requested that the facts of human and indigenous peoples’ rights violations be checked, and information provided on the legitimacy of gold mining, timber cutting and construction on the territories of traditional residence and husbandry of the indigenous peoples of the Amur Oblast. RAIPON got a response from the Office of the General Prosecutor informing them that their request had been forwarded to the Office of the Prosecutor of the Amur Oblast. Unfortunately, the responses RAIPON got from the Amur Oblast and from the Ministry of Natural Resources of the Russian Federation contained no information on their fulfilling the constitutional obligations concerning the protection of the environment and traditional way of life of small ethnic communities, according to article 72, part 1, paragraph “m” of the Constitution of the Russian Federation. It was only said that no legislation nor indigenous peoples’ rights violations were detected concerning the distribution of geological resources and state forests.

The next meeting with Ms. Kolesova took place in May 2006 at the RAIPON workshop in Ulan-Ude. From Ms. Kolesova’s speech and her conversation with our RAIPON experts, Olga Murashko and Yana Dordina, the following was understood:

In March 2006 Ms. Kolesova was summoned to the village council of Bomnak, where the prosecutor of the Zeyskiy Rayon shouted at her, demanding explanations as to how she could have written a letter like the one she had addressed to Mr. Kharyuchi and hinting that she could be called to account for slander.

Moreover, Elena Kolesova said that Vadim Yakovlev, a hunter and reindeer herder, whose lands were used for the construction of a timber cutters’ center and whose reindeer were shot by the timber cutters, committed suicide on 9 January  2006. According to what he said a few days before his death, the reasons were constant threats and torments from the timber cutters and local police that he got in response for his complaints about their shooting his reindeer.

At the end of April 2006 Ms. Kolesova’s son was condemned to 10 years in prison, even though he was innocent. At the same time, she reported that equipment was again being provided for the suspended construction of the Umna-Elga railroad. The people are concerned that the resumption of the construction will lead to the loss of their last lands and reindeer.

Elena Kolesova also brought Arkadiy Okhlopkov’s new letter to the RAIPON magazine. Mr. Okhlopkov wrote that the people cannot tolerate this any more, that they are ready to protect their reindeer, pastures and hunting grounds, and proposed himself to be a self-immolation sacrifice once again.

The following are transcribed excerpts of a tape recording of the conversation between Elena Kolesova and RAIPON experts Olga Murashko and Yana Dordina (6 May 2006):

“On 9 January 2006 Vadim Yakovlev shot himself. He was young and he was the best hunter and reindeer herder of our community. My brother and I accompanied his family to the taiga. Vadim asked me to find a way out as soon as possible. ‘I live like an animal in the taiga,’ he said, ‘They won’t leave me alone. In the spring I’ll have to move and move near the center. I have no idea what’s going to happen. If you do nothing, I’ll find a way out myself’. I went to the settlement, leaving my brother with him, and two days later he committed suicide. He left behind two little kids. 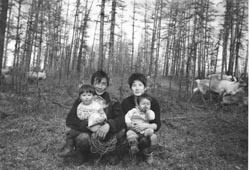 … In 2000, on the pasturage and hunting territory our community has used since time immemorial, construction of the Umnak-Elga railroad began, bringing along timber merchants and poachers. In 2002 the work was suspended, but a timber merchants’ center was established exactly in the area where Vadim’s reindeer go for annual calving. He tried to lead the animals away from the place, but it was impossible to change their direction. So female reindeer ran off to calve where they were used to. Timber merchants or their watchmen shot them on two occasions: the first time they killed eight reindeer, the second time, fourteen. We have no proof that it was them, but they say that about this time in Gorny, a settlement not far away from us, reindeer meat was being sold. The centre watchmen were from Gorny, and they didn’t deny it. When Vadim and I came to the centre and asked why they shot our reindeer, they answered, ‘How could we know they belong to you?’ We explained that domestic reindeer have a bell on their neck and a botalo (a stick preventing then from running off). And the watchmen said, ‘If a reindeer comes out of the forest, why should we look at its neck? You should nail your name on their foreheads’. Vadim couldn’t help but go for the one who teased him so cruelly. He got beaten. But the timber merchants had no license for hunting.

And when they came to celebrate New Year’s Day with us, he talked to me constantly, he didn’t know what to do. When he set out to the taiga on 4 January 2006, he was so upset that my brother and I went with him to help them set down the chum and get settled. And as soon as I left them, he shot himself. He promised to find a way out, and so he did.

… Since gold-diggers, railroad builders and timber cutters began to work on our lands, there were many unnatural deaths among our men. When I began working, we had three herds of more than one thousand deer each. There were 22 young hunters and reindeer herders, and today none is left – and no natural deaths. Some died of disease, some of alcoholism, others committed suicide. We talked about it with Vadim a lot.

… My husband died of heart attack – he couldn’t bear the way I was persecuted … That’s another story about how our house was searched when we got a premium for the first antlers we sold … After the autopsy I was told his first heart attack had been exactly when we were searched, and the second one was the one he died of. He was extremely good at hunting and didn’t drink alcohol.

… Our elder son, born in 1976, shot himself under unascertained circumstances in the winter of 2005 … He was alone with his wife in the taiga. She says he had shot himself when she was asleep. She doesn’t tell much about it, and it’s easy to understand. She had spent a long time with his corpse before they were found. And now she has his daughter, the girl is eight months old.

… Recently, my younger son has been condemned for ten and a half years in prison … It was an accident, there were three of them in the house: a girl, a Russian guy and him. My son says the gun fell down and the Russian caught it, but it went off so that the bullet killed the girl. Both were arrested but they let the Russian go right away, and my son spent a year in custody. The gun belonged to him, and even though the experts proved that he couldn’t have done it because of his height, he was condemned anyway. When I visited him, he told me it was all because of me and my job and asked me to quit it.

… The local prosecutor came and summoned me to his office. You should have seen him yell at me, ‘Was that you who wrote this? How dare you write this kind of thing? Do you have proof of it? You will answer for the slander…’. It was in March [2006], and in April the court condemned my son”.

Who is to blame for the “best hunter and reindeer herder’s” suicide? Whose fault is the fact he left two orphan children? Who is to blame that the old man Arkadiy Okhlopkov, who has been seeking the truth for his people for many years, is desperate and ready to burn himself just to draw attention to the Evenks’ situation?

Comparing these people’s stories, full of pain, with cold and, to say the least, contradictory responses of the officials can cause nothing but indignation. The Amur Oblast Procurator’s response to RAIPON's legitimate request for an environmental assessment on the projects implemented on the traditional lands of the Evenks is the following: “Citizens and public organisations (unions) have the right to obtain from the federal body of executive power and its territorial bodies the information on the results of environmental expert evaluations. For this reason, it is impossible to send you the copy of the positive conclusion (environmental seal of approval).” This creates a feeling of being mocked. Certainly, RAIPON won’t leave it without consequences, but what should hunters and reindeer herders do in the taiga?

To help the Amur Oblast Evenks, Sergey Kharyuchi, President of RAIPON, sent an appeal to the Plenipotentiary Representative of the President in the Far East Federal Okrug and to the Secretary of the Public Chamber of the Russian Federation, the academician Velikhov, with a request to take measures and stop the violations of the human and indigenous peoples’ rights in the Amur Oblast. We enclose all the documents we have, including the Evenk representatives’ letters and the authorities’ responses to the appeal. This time we hope for a fair investigation on the substance of the case.